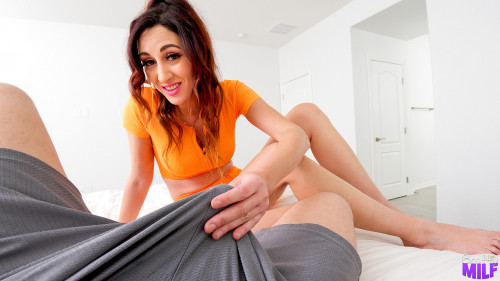 Описание:
Artemisia Love has noticed that her stepson, Jason, has been acting really down lately. He s been in a bad mood and hiding his room a lot. Artemisia has been trying to show some stepmotherly concern to her stepson, so she joins him in his bedroom and asks what s wrong. It takes her a few tries and a promise to not just go running to Jason s dad with his problem, but eventually Jason tells her. He explains that his girlfriend hasn t slept with him in over a month and his blue balls are hurting a lot. It turns out that s one problem Artemisia can help him out with! She has already promised not to tell Jason s dad, so there s really nothing stopping her from helping Jason drain his balls.

One Artemisia has made her case, Jason really can t say no. He s already nice and hard at the sight of his bigtit stepmommy. When Artemisia lays hands on his cock, he just gets even harder. Leaning in, she opens up and starts sucking him off. Her lips are incredibly talented, easily sucking and slurping on Jason s big dick with obvious pleasure. Artemisia gives him her best shot, but Jason just can t cum quite yet. She tries showing her boobs off, which helps but doesn t get him there. They eventually agree that Jason could try fucking her to see if it helps.

Since Jason is on his back already, Artemisia only needs to get her clothes off and then slide down on the D. Watching his hot busty stepmommy ride him in her bare twat is just about the hottest thing Jason has ever done! For her part, Artemisia is having a great time enjoying her stepson s nice thick fuck stick. She turns around to indulge in some reverse cowgirl action, then rolls onto her back so Jason can bang her meaty pussy to his heart s content. That finally does the trick, bringing Jason to a climax that he can barely pull out in time to let loose. He covers Artemisia s shaved twat and stomach with his cum shot, then agrees when Artemisia offers to help him out whenever he needs.